Save Regularly: Words of Wisdom from Mom

April 15, 2014 / Money, Mothers / Comments Off on Save Regularly: Words of Wisdom from Mom
Image courtesy of TradingAcademy.com.

“It doesn’t matter how much you save, just do it regularly.”

Words of wisdom from my mother, the best financial adviser that I’ve ever had. She told me this a million times growing up. It made absolutely no sense to me. In a way, it still doesn’t. But, I did it, and I hope you are, too.

I was in my 30’s when I returned to the States after a 12-year sojourn in Europe, Asia, and Africa, and I knew that it was essential to be aggressive with my savings for retirement. My first job upon my return was Romance Language Cataloger at Harvard Law School. Seems like I would be set, but at that time, Harvard paid primarily with prestige, not cash. My salary was 1/3rd less than the previous year working for the Swiss government.

Despite my decreased income, I remembered what my mother said, and I started by putting $25, the absolute minimum into my 401(K). When I got my paycheck, only $17 was taken out of my salary, but $25 was put into savings. This was a bit confusing at the time. So I looked closer. Since the savings were not taxed up front, my income was decreased by $25. Therefore, my income was less and taxes were less. It doesn’t really matter if you understand all this, but it’s important that you do it. For years I put my raises into savings in order to beef up my retirement cushion. Then, in time, I saw the money grow and earn income that I didn’t even have to work for. I liked that idea! What a motivator!

My mother had a big dose of Scotch blood. Her mother’s last name was Burns. Scots are notorious for their frugality. According to the book, “The Millionaire Next Door,” they are also among the wealthiest Americans because they pinch pennies.

When my mother began working outside the home as an English teacher, she decided to invest some of her own money. Having experienced the Great Depression, she had a view of life that is becoming increasingly distant in our minds. 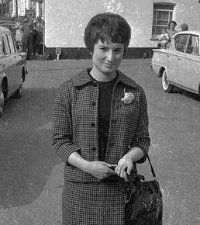 With this mind set, she stood just outside the grocery check-out in order to decide which stocks to purchase. She watched what people were buying. She knew that when times are bad, people eat more oatmeal, because it’s hearty and inexpensive. She bought Quaker Oats. She also remembered well the days when people hung their catalogs in the outhouse to use as toilet paper and when ladies had to rely on rags for their feminine hygiene. She thought that modern amenities that improve our lives along these lines would be among the last to go in times of need. She bought Kimberly Clark. Both stocks grew and grew.

My mother was a reader. At the end of her life, she read the Wall Street Journal every day. She loved playing the stock market, conservatively. It kept her sharp, and it was fun.

Know Your Own Money Personality

Even though she had a strong influence on me, I don’t invest the same way my mother did. Everyone is different, and it is important to know your own money personality.

I can help you with the blocks that keep you from saving and investing. We can identify your money personality, and even address financial issues in couples counseling. Money is the number one cause of arguments in couples and a leading cause of divorce.

I knew when I was young that I didn’t mind being young and poor, but I really didn’t want to be old and poor. My mother blessed me with her wisdom, and I’m grateful.